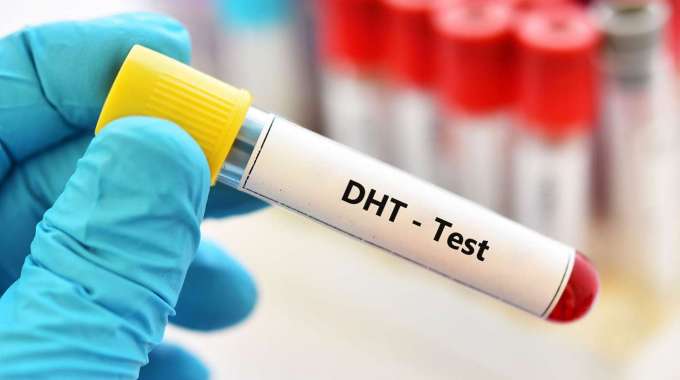 DHT is one of the main culprits of androgenetic alopecia, the common hair loss.

Its mechanism is based on the atrophy of hair follicles, which leads to permanent hair loss.

In order to counteract its action several solutions are available, such as medical solutions based on inhibitors of a particular enzyme called 5aR, minoxidil and natural supplements.

The androgenetic alopecia is a problem that affects either men or women. In fact, although the effects of hair loss are often only associated with men, women also suffer from it.

In this regard, one of the main culprits of the whole process is a particular molecule called DHT.

The term, which stands for dihydrotestosterone, is a substance present in the scalp and originated from testosterone.

The exact mechanism that determines the relationship between DHT concentration and hair loss is still not completely known.

Although the molecule plays fundamental role during the developmental stages of male hormonal traits, several scientific researches relates its high concentration to the appearance of baldness.

Indeed, dihydrotestosterone, which originates from the testosterone present in our body through the action of the enzyme 5-alpha-reductase, or 5aR, interacts with the androgen receptors (ARs) present in the hair.

This interaction results in a progressive miniaturization and subsequent atrophy of hair follicles, which ultimately leads to permanent hair death.

Other causes of baldness

In addition to DHT and androgenetic alopecia, there are many other causes that can lead to hair loss. For example these causes can relate to the alopecia areata, an immune disease in which the body attacks its own hair follicles, thyroid dysfunction or even infections.

Solutions to baldness by DHT

There are plenty of solutions available in the market to fix a problematic of DHT hair loss. If you suffer from baldness, however, the first advise is always to consult a medical expert in the field, such as a tricologist, in order to determine the exact causes and the most appropriate solutions.

One of the most classic remedies against DHT hair loss is the use of so-called “inhibitors” of the 5aR enzyme. These remedies, such as Finasteride, can block the action of the 5ar enzyme which is overproducing DHT from testosterone.

At this point the concentration of dihydrotestosterone decreases and the same will be for the process of hair atrophy.

Minoxidil is another frequently administered solution to diminish the effects of hair loss.  The drug, which has a vasodilating action, can increase the supply of blood, nutrients and oxygen to the hair follicles, which grow stronger and less prone to fall out.

In addition to drugs such as finasteride and minoxidil, it may also be recommended natural supplements, these ones can be based on serenoa repens, which promotes the natural hair regrowth.