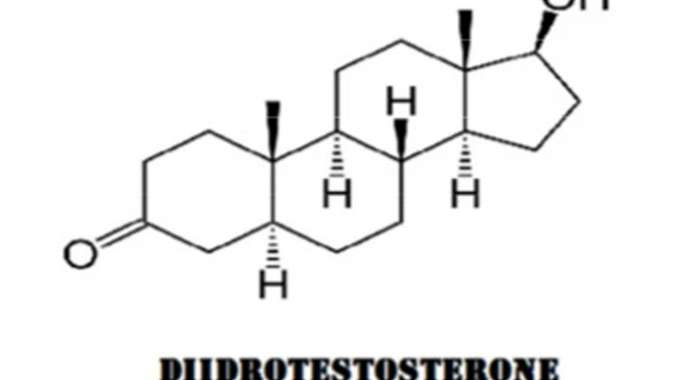 Dihydrotestosterone is a molecule that plays a very important role in our bodies. Known as DHT for short, it is part of the androgen family. That is, it stimulates in adolescence the development of male traits, such as vocal timbre or muscle tone.

When levels of this hormone are too high or too low, however, it can lead to several problems. What are the problems related to DHT and how to get around them?

This term, often abbreviated as DHT and also called androstanolone, refers to the molecule 5-alpha-dihydrotestosterone. DHT is an androgenic hormone that influences several regulatory mechanisms within our body.

The process of origin of this hormone is due to the enzyme 5-alpha-reductase (5AR), hence the prefix “5-alpha.” The latter acts by converting the male hormone testosterone to DHT in various tissues of the human body, such as the brain, scalp, and prostate gland.

A scientific research published in 2021 in PubMed was concerned with describing and investigating the biochemistry of the molecule in question. The major points of attention in this study involved determining the main functions and areas of influence of DHT.

The primary task of dihydrotestosterone is to promote the development of male traits during puberty and adolescence; it also acts by maintaining the action of the prostate gland and seminal vesicles. The basis for the functioning of DHT is mainly due to its membership in the androgen family.

The conversion of DHT occurs permanently through the action of the enzyme 5AR. At the biochemical level, DHT acts similarly to testosterone but is much more potent than it.

Dihydrotestosterone is considered a sexual steroid. When the male fetus is still in the mother’s womb, the presence of sex steroids allows the growth of the prostate, penis and testes to develop. The production of this substance has been scientifically measured within the fetus beginning in the fourth month of pregnancy. In cases where DHT levels are low or the hormone is completely absent, one could risk birth with ambiguous genitalia.

During puberty and adolescence, dihydrotestosterone further stimulates sexual differentiation causing the development of facial and body hair and prostate growth.

When men reach adulthood, the significant roles of DHT are limited. In case the levels of DHT exceed a certain threshold, it can cause hair loss and prostate enlargement. Conversely, if levels fall below a minimum, problems in the sexual sphere such as decreased libido and erectile dysfunction can occur.

Changes in DHT are important to monitor. In fact, the effects of an overabundance may be evident especially on the hair and in the prostate..

Regarding the former, having a lot of DHT can promote hair loss from androgenetic alopecia. The influence on the prostate causes its enlargement with problems related to the urinary system.

The main treatments for these problems involve taking 5-alpha-reductase enzyme inhibitor drugs such as finasteride.

Hairline: all the features

The hairline, in English hairline, is the first noticeable part of a person's hairstyle. The…

The hair follicle is the basic structure surrounding the hair root. Its major components, including…