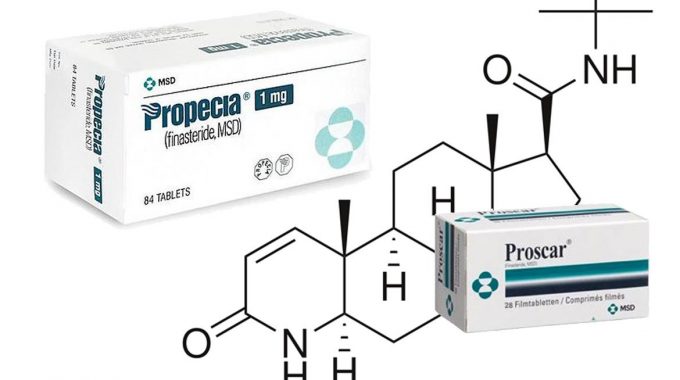 Finasteride is a drug approved by FDA (Food and Drugs Administration) for the treatment of androgenetic alopecia, or common baldness. Born as a remedy for benign prostatic hypertrophy, it proved to be able to act on the hair follicles of the scalp by counteracting hair loss caused by hormonal factors.

.
Benign prostatic hypertrophy is a disease that affects the prostate and is attributable to an excess of a particular hormone, called DHT (dihydrotestosterone).

To realize the dependence of the condition on dihydrotestosterone was the scholar Julianne Imperato-McGinly. In 1974 she conducted a study on a group of Caribbean hermaphrodite children with the aim of understanding the reasons for their abnormal sexual development. These children were born with the sexual organs of both sexes and, upon entering puberty, developed the male sexual organ.

The research revealed that the cause of the abnormalities was the presence of a genetic combination that caused a lack of the enzyme 5-alpha-reductase and a consequent lack of DHT.

The study also revealed that all individuals involved had a smaller prostate than normal. It was therefore hypothesized that an excess of DHT could cause the prostate to swell.

A drug capable of inhibiting the 5-alpha-reductase type two enzyme was developed in order to find a remedy for benign prostatic hypertrophy. In this way Finasteride was born.

The drug was approved by the FDA with a dosage of 5 mg against benign prostatic hypertrophy.

Immediately it was realized that the quality of the hair in patients treated with the drug improved considerably. Finasteride was thus proposed with the reduced dosage of 1mg and approved by the FDA in 1997. Propecia 1mg was placed on the market. The drug was protected by patent until 2013, from that date it is possible to find other generic drugs with the same dosage on the market.

How does Finasteride work?

The main cause of the follicular miniaturization process typical of androgenetic alopecia is dihydrotestosterone. As already mentioned, Finasteride is able to intervene on the synthesis of this hormone, inhibiting the 5-alpha-reductase type 2 enzyme. The conversion of testosterone to dihydrotestosterone at the tissue level is slowed down.

Finasteride reduces the DHT level by preventing hair follicles from shrinking and, at the same time, can cause miniature follicles to produce terminal, non-vellus hair.

This prevents further hair loss and, in some cases, regrowth.

Finasteride does not prevent the physiological activity of testosterone in tissues, therefore it has neither androgenic nor antiandrogenic effects, does not interact significantly with the hypothalamic-pituitary-gonadal axis and has no effect on the levels of cortisol, thyroid stimulating hormone.

In about 50% of cases, in men between 18 and 41 years of age, Finasteride proves effective. There is an interruption of the fall. In the other 50% there is also a slight growth.

Only in a low percentage of cases does the drug prove ineffective or the treatment has to be discontinued due to side effects.

How to use the drug

.
It is advisable to take the drug after an appropriate specialist visit. The recommended dose is 1 mg/day.

If the therapy is taken before the age of 40 years, it is not necessary to undergo blood or instrumental tests. After the age of 40, the dermatologist generally prescribes tests to understand the condition of the prostate. Among these, the most common are prostate-specific antigen dosage, measurement of urinary jet strength, suprapubic ultrasound and rectal examination.

.
For Finasteride to be effective, it must be hired for at least three months. In many cases the specialist recommends that the therapy lasts one year or more. The most common fear concerns the possible onset of side effects.

As already mentioned, such side effects are generally absent or are interrupted by discontinuation of therapy.

In the male fetus, Finasteride can cause abnormalities of the external genital organs. The drug should therefore not be taken by women of childbearing age or handled during pregnancy.

In less than 3% of cases in men, Finasteride can cause:

In presence of obesity or varicocele, Finasteride could alter spermatogenesis.

Very rare cases of unilateral gynecomastia have been found.

There is no evidence showing a link between Finasteride and prostate cancer.