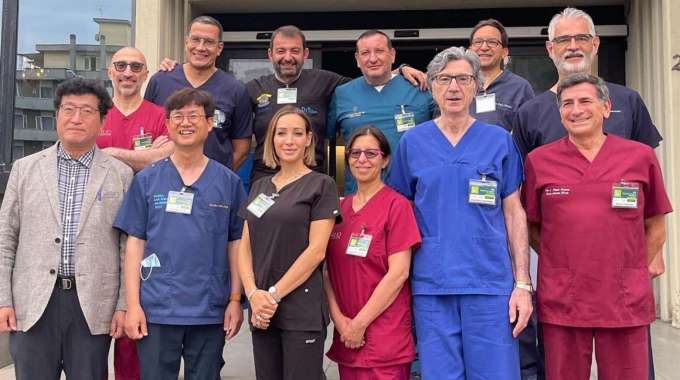 During the days of May 26 and 27, 2022, a workshop on baldness surgery was established in Florence. SITRI ( Italian Society of Trichology) and ISHRS ( International Society of Baldness Surgery) collaborated to organize this important event.

Major experts international participated, who through live demonstrations highlighted the peculiarities and advancement of technologies in the medical-scientific field.

The workshop was chaired by Dr. Chiara Insalaco as Scientific Organizational Chair, together with Dr. Bessam Barjo, Chair of ISHRS Europe.

The problem of hair loss afflictsmillions of people around the world every day. Thanks to ongoing studies and research in the field, medicine has made great strides over the years.

Nowadays there are techniques, such as hair transplantationi, that can fully solve calvice, both in the male and female case.

The Live Event in Florence

Thanks to the work of Dr. Chiara Insalaco, a live event was organized in whichthe various techniques of hair autotransplantation were demonstrated. During the workshop, three operating rooms were set up in which three different types of procedures were performed on patients suffering from alopecia androgenetics.

In the first operating room, the applicability of the combined Strip and techniques was demonstrated Strip and FUE to long hair. One thousand follicular units were transplanted for gulf reconstruction (u.f.) on a 37-year-old patient suffering from androgenetic alopecia and treated with minoxidil and finasteride for one and a half years.

The group was led by Dr. Vincenzo Gambino of Milan who demonstrated the Strip technique. , Along with him was Dr. Otavio Boaventura from Belo Horizonte, Brazil who, demonstrated the long hair FUE technique using a device, known as “Trivellini Mamba.” The peculiarity of this device is the presence of a punch with a ring suitable for long hair, also known as “Ring Long Hair Punch.”  Follicular units were implanted with “Lion Implanters “.

The goal of the team in the second operating room was to demonstrate the FUE Technique on a 54-year-old patient for reconstruction of the crown area. The technique, also known as “Partial shaven FUE,” shaving only the donor area, had a target of 1000 f.u. to be implanted in the crown area.

The group in this room was led by Dr. Piero Tesauro of Milan, president of SITRI. Along with him were Dr. Mauro Speranzini of São Paulo, Brazil, who demonstrated the use of the “Brazilian Beltec” device by means of the Waw punch or Mamba punch, inserting u.f.’s with “Rainbow blunt” implanters into pre-created recipient sites; Dr. Nilofer Farjo, ISHRS president, who highlighted the use of the latest version of Dr. Devroye’s “WAW” tool with trumpet punch; Dr. Moonkyu Kim, of South Korea, who demonstrated the use of his multi-graft sharp implanter known as “INRUT.”

In contrast, Dr. Georgios Zontos demonstrated the use of the new Flared punch using the “Ertip” device to remove follicular units. The insertion was done through Sharp Implanters.

The workshop was a great success among all participants, who were fully involved through the use of advanced sharing technologies.

The organization of the next live event! is already underway.

Alliance 4 hair is a platform of brand new creation, but with the enormous experience…