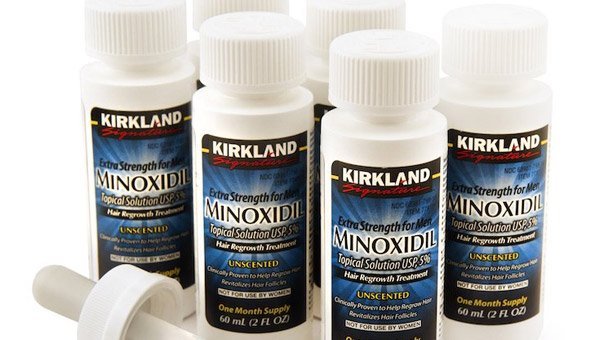 The possibility of using Minoxidil to combat hair loss was glimpsed in the late 70s. Among the side effects of the drug, episodes of hypertrichosis were observed.

Following extensive research, the first study was conducted in 1984 with the aim of verifying the effectiveness of Minoxidil in the form of a lotion against androgenetic alopecia. Several other studies were conducted and this led the FDA (Food and Drugs Administration) to include it among the drugs indicated against the AGA in 1988. The Italian Ministry of Health approved the drug in 1990.

How does Minoxidil work ?

The mechanism of action of the drug for hair follicles of the scalp is not yet completely clear to experts. It seems that Minoxidil is acting on several fronts and numerous studies are still underway.

Unlike Finasteride, Minoxidil does not act hormonally by inhibiting the action of the 5-alpha-reductase type two enzyme. Precisely for this reason, the drug also acts on the follicles of non-androgenic scalp areas.

It seems that Minoxidil is able to influence the life cycle of hair follicles extending the growth phase, called anagen phase. The telogen phase shortens and the anagen phase resumes earlier than usual.

The follicles become thicker as the therapy progresses, and the hair becomes thicker and longer.

Indubbia is the vasodilatory action of the drug, as well as its angiogenetic mechanism that leads to an increase in vascular growth factor (VEGF).

The intracellular channels of potassium are opened by the drug and this would cause increased follicular growth, as indicated by some studies.

The cells of the dermal papilla proliferate and the follicles become thicker and more robust as a result.

The synthesis of prostaglandin E2, which plays a protective function against the cells that make up the hair follicle, is stimulated by Minoxidil.

It seems, finally, that Minoxidil performs an antifibrotic function, slowing down the synthesis of collagen, acting on the enzyme lyse-hydroxylase, responsible for the maturation of fibers. This leads, consequently, to a reduction of inflammation at the peripollicular level.

All the above mentioned activities make Minoxidil a drug able to act on different forms of alopecia and in particular on androgenetic alopecia.

In order for Minoxidil to be effective, it must be applied topically directly to the scalp. The drug is then available in the form of foams or lotions in concentrations of 2% and 5%.

A trichologist should be consulted to define a suitable application plan for the individual case, however, in general Minoxidil should be applied to the affected area twice a day. Therapy should be continued for at least 4 months in order to observe the effects.

Experimental studies indicate that the drug is having the desired effect in 50% of cases.

It is possible to observe an increase in the diameter and length of the hair, a stopping of the fall and, in rare cases, regrowth.

The effectiveness of the drug decreases with advancing age and in situations of particularly advanced baldness.

Numerous studies have proven that Minoxidil is more effective in the vertex area than in the front-temporal area.

What happens when you stop therapy?

The suspension of therapy generally causes an episode of telogen effluvium. At the end of the phenomenon, the clinical picture will coincide again with the one before the beginning of the therapy.

We recommend that you consult your specialist for the definition of a maintenance therapy or if you want to discontinue the application of the drug.

Contact dermatitis, itching, flaking, scalp dryness are among the side effects found.

The drug is contraindicated in case of pregnancy and breastfeeding, in the presence of known allergy to the active ingredient and coronary heart disease, arrhythmias, heart failure.