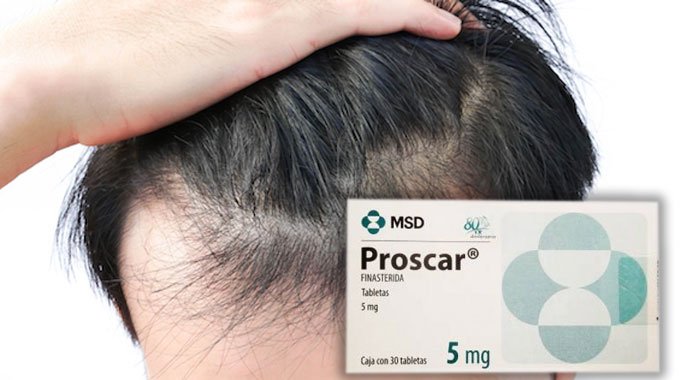 Proscar is a medication within which the active ingredient of finasteride is present.

The treatment based on this drug was introduced to treat benign prostatic hyperplasia. However, over time its use has also been marketed for the treatment of baldness.

By breaking proscar of 5 mg into several pieces, small doses are obtained to treat alopecia and similar conditions. In this sense proscar can be used in a similar way to propecia, finasteride of 1mg.

The finasteride contained in proscar acts as an inhibitor of the 5α-reductase enzyme. This enzyme is responsible for the conversion of testosterone into dihydrotestosterone, or DHT. The latter can cause the appearance of androgenetic alopecia because it miniaturizes the hair follicles.

In fact, finasteride only blocks the type II of the 5α-reductase enzyme, which in itself produces 70% of DHT.

Taken over a period of a few months on a continuous basis, finasteride can block and reverse androgenetic alopecia.

There are several scientific studies that testify to the effectiveness of proscar on hair growth.

A study1 was published in 1994 in “The Journal of Clinical Endocrinology & Metabolism”.

Finasteride in the form of proscar was administered to six males and five females of macaques for six months.

After the therapy, the level of dihydrotestosterone dropped between 60% and 70%: both males and females showed significant hair regrowth compared to the comparison sample.

This research showed that proscar, by inhibiting 5α-reductase, can reverse the balding process also present in animals.

.
Scientific research2 aimed to establish the ideal dose of finasteride for men with balding conditions. A population of males between 18 and 36 with frontal baldness were given finasteride for a period of time. The amounts of medication ranged from 5 mg per day down to 0.01 mg per day, along with placebo control.

The results suggested how the doses of 1mg and 5mg per day were the most effective in combating the condition.

.
An additional3 study conducted on 87 women was published in 2011. The objective was to test the clinical efficacy of finasteride in the 5 mg per day format, i.e., that of proscar. The tested population consisted of women with female pattern baldness. The therapy lasted for 12 months. After this period, more than 80% of patients had significant improvements in hair thickness and density.

In conclusion, it has been shown that the use of 5mg of proscar daily can have positive results for women as well.

Usually the dose that is recommended is 5mg per day via oral intake.

It is not necessary to take the medication near meals. Also, the drug can be accompanied with the use of doxazosin to control prostatic hypertrophy. Finally, in case the patient suffers from kidney failure, the dosage of proscar can be reduced according to medical advice.

Although proscar and propecia both contain finasteride, the tablets of the former are 5mg while those of the latter are 1mg. Moreover, they are manufactured by the same pharmaceutical company, Merck.

However, for the treatment of alopecia, the only drug prescribed is propecia; on the other hand, proscar is only prescribed for diseases related to the prostate.

The advantage of using split proscar over propecia concerns the cost, which is lower.

However, it is always recommended to follow the indications of the doctor who will guide the patient towards the most appropriate solution.

It is essential to know that the use of proscar is not recommended in the following cases:

If you are allergic to the finasteride contained in the drug

If you are a woman in pregnancy or lactation. In fact, the active ingredient contained in the medicine may have adverse effects on the development of the fetus or newborn child.

As you are pregnant or breastfeeding.

When you are intolerant to lactose, because it is contained in proscar.

SIDE EFFECTS OF PROSCAR

Side effects related to proscar use may include:

Sexual sphere: decreased libido and impotence. In most cases these phenomena are confined to the initial phase and vanish during the therapy. Other effects such as erectile dysfunction or reduced ejaculation may remain after the end of treatment.

Physical Sphere: among the most common are arrhythmia, hives, swelling. In severe cases, breast cancer can develop in men and problems with depression.

Proscar is a drug officially prescribed for the treatment of prostatic diseases in Italy.

The active ingredient finasteride contained in the drug inhibits the enzyme 5α-reductase type II. By counteracting the conversion of testosterone into DHT, proscar combats the miniaturization of hair follicles.

Several studies have demonstrated the effectiveness of the drug on both men and women.

Contraindications of proscar concern those who are allergic to finasteride or those who are lactose intolerant. Pregnant or breastfeeding women should pay more attention as they can’t use it.

The most common side effects concern the sexual and physical spheres: decreased libido, impotence, arrhythmia, hives and swelling are the most commonly encountered effects.