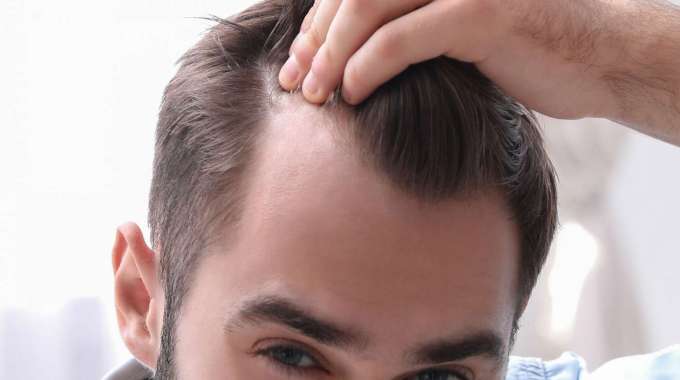 Receding hairline is a very common phenomenon nowadays. It describes the loss of hair in the frontal area of the hair, near the temples.

Although it is purely associated with men, it can actually affect women as well.

Some of the most common causes of receding hairline include heredity, alcohol and tobacco abuse, nutrition and excessive use of cosmetic products.

What is meant by receding hairline

By the term “hairline” we mean the absence of hair in the fronto-temporal area of the head. The thinning in question may be physiological, ie a sign of advancing years, but also the first step of androgenetic alopecia. In these cases the hairline is due to genetic causes, although in reality can be caused by several other factors..

Androgenetic alopecia is the most common form of hair loss, the common caldness. On this subject there is a lot of in-depth literature. At the following link a scientific article that deals with the disease in more detail.

The problem can be reduced to precise biological processes, such as the transformation of testosterone into DHT by the enzyme 5-alpha-reductase. DHT, a hormone that stands for dihydrotestosterone, interacts with the hair bulbs leading to their atrophy. This, in turn, leads to hair loss in various parts of the scalp, from the forehead to the middle area to the vertex.

In contrast, hairline refers only to the absence or loss of hair in the forehead area.

When and who can go bald

The process of receding hairline does not begin at a specific age and does not necessarily affect only men. In fact there are more and more women who suffer from alopecia, which actually does not occur only on the forehead but is more distributed throughout the head..

In addition, receding hairline can strike at a young age, starting from the age of 20. In these cases we speak of young hairline.

The causes of the problem

There can be several causes that explain the phenomenon. First, the condition may be the initial step of the advancement of androgenetic alopecia, the causes of which are hereditary..

Losing hair in the forehead can also be caused by the excessive secretion of sebum by the sebaceous glands, or even by diseases such as seborrheic dermatitis or even the presence of dandruff..

Daily life also plays a key role in the progression of the phenomenon. In fact, becoming stemped can also be caused by abuse of overly aggressive cosmetic products such as dyes. In addition, even smoking and taking alcoholic frequently can induce local inflammation that can later result in hair loss.

If you suffer from this condition, it is important to act early and contact an expert in the field, such as a dermatologist. In fact the sooner you act on the problem the easier it is to obtain positive results..

Before addressing the therapy is necessary to determine the underlying causes, that for everyone could be different.

A noteworthy treatment is certainly the medicinal, with administrations of drugs such as minoxidil or finasteride.

To regrow hair lost due to receding hairline it is necessary to resort to hair transplantation..