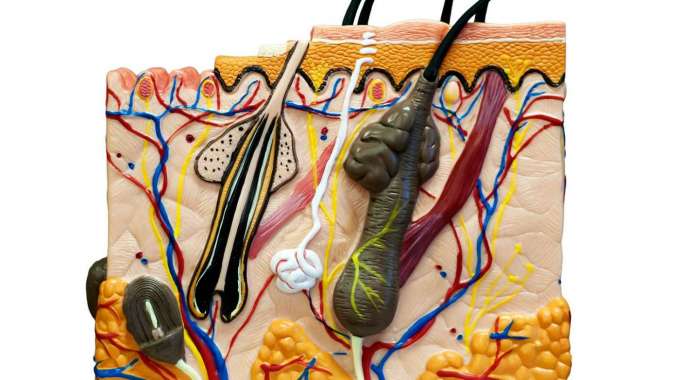 Its main role is producing a substance called sebum, which is essential for our skin.

Sebum helps to protect our skin from bacteria and external agents in normal amounts, but in presence of a higher quantity, it can cause problems.

Sebaceous glands are particularly prominent along the skin of our face and head.

Physiology of the sebaceous glands

Most of sebaceous glands are found on the scalp as well as in the face. In addition, each sebaceous gland is almost always associated with a hairbulb, which is connected to the periphery of the dermis through a special channel.

The role of these glands is to synthesise  and secretes a particular fluid called sebum. The latter is very important as it protects our skin from external agents, such as bacteria and pollutants, as well as fighting dehydration.

Main components of the sebaceous glands

The assembly of the sebaceous gland with hair bulb compose a structure called the pilosebaceous unit. This structure allows sebum to escape to the surface trough a direct channel.

Sebocytes are the main cells that make up sebaceous glands. These cells, which are responsible for the composition of sebum, are centered in 3 concentric areas:

This is an excessive secretion of sebum by the sebaceous glands on the skin.

As a result of this condition, due to excessive activity of the glands, itching and pain may occur.

If this condition continue over time and no medicines were administered, it may also cause skin inflammation and hair loss.

There can be several causes that lead to sebum hypersecretion. First of all, there may be hormonal imbalances, such as puberty for men and menopause for women. In addition, metabolic disorders and digestive problems can also lead to this condition.

A 2015 study1 links the issue of baldness to the sebaceous glands. In Japan a following research on more than 200 patients suffering from androgenetic alopecia showed that an overgrowth of sebaceous glands and a consequent preservation of follicular stem cells can promote the process of hair loss.